Swami Prem Dayal was the first member of the Mudrashram® lineage to externalize, or reveal himself outwardly by giving out his name.

On the higher Planes, Swami Prem Dayal works closely with other members of the Hierarchy of Light to promote conflict resolution between religious groups, to assist individuals to recover from addictions and to overcome problems that hinder them from fulfilling their personal and spiritual potential.

People who meditate with us see Swami Prem Dayal at the Soul Door (Atma Dwara), behind the Soul. He looks something like the picture on the right that George had an artist prepare.

Much of the aspirant teaching work from the early 1990s onward was assumed by the second of the Mudrashram® Masters to externalize, Swami Charan Das. His first appearance came through in a series of manuscripts written from 1992 onward.

People who meditate with us have seen Swami Charan Das at the eight-petaled lotus center of the Subconscious mind. He looks something like the picture on the right that George had an artist prepare.

He inspired The Way of the Heart, How to Read Your Own Past Lives, and Karma workshops.

On the higher Planes, he works with the Hierarchy of Light to promote accurate knowledge of the bands of the mind and the Great Continuum of Consciousness, and helps individuals dissolve the barriers that keep them from making further progress on the inner Path.

The newest of the Mudrashram® Masters to externalize in 2000, Swami Prabhu Maharaj is focused upon making meditation understandable to a wide variety of people through using modern technologies.

He has been actively involved in giving guidance for articles on this web site, as well as developing popular treatments of meditation that can be used in everyday life.

He has begun to appear in meditation behind the door of the Superconscious mind behind the Self (Swa Dwara). Here is a black and white picture of him done by our artist.

When A Master Externalizes

When a Master externalizes it means:

If you want to get a picture of the three Swamis for your altar, you can now order them on our sister site, Mudrashram® Publishing. The picture looks like this: 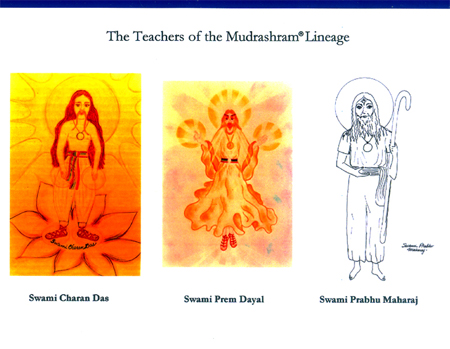 You can order it using Pay Pal here.