In the Mudrashram® System of Integral Meditation, we use the term, the cutting edge of spirituality. In this article, I will attempt to clarify what we mean by this, how your cutting edge is identified, and what happens when people unfold themselves spiritually outside their cutting edge.

The cutting edge of spirituality is the ensouling entity within you that is animated by the living force of Spirit, which we call the Alaya. This pointing finger of the Divine shows you what is the appropriate next stage of spiritual growth. There are 13 potential levels that you may experience as your cutting edge. These are shown below.

You may also create imbalance by awakening a nucleus of identity.

Yet another way to create imbalance is to open the Nadamic channels of your spirit, either beyond your current level of spiritual evolution at your cutting edge, or at another band of the Great Continuum of Consciousness altogether.

How the Cutting Edge of Spirituality is identified

On the Transcendental portion of the Bridge Path, there are three important centers that give information about the cutting edge of spirituality. These centers are the Lotus Feet center, the mirror of Souls center, and the Jewel of Alaya.

These three centers reflect your cutting edge of spirituality, and can be used to "read" which of your ensouling entities has been activated by the Divine Spirit. A meditation on these three centers from above reveals the following alignment:

Since many aspirants either cannot find these centers for themselves, or lack the clarity of inner vision to read them, we include a reading of the spiritual cutting edge for those who take the Mudrashram® Master Course in Meditation or the Accelerated Meditation Program.

Interested individuals may also find out this information in a Basic Soul Reading.

Knowing your cutting edge of spirituality is important for several reasons. It allows you to:

When you work in a balanced way at your cutting edge, you do not experience personality dysfunction, cognitive and emotional dysregulation, or personality shutdown as a result of your spiritual practice.

There is a distinct progression of spiritual imbalance that occurs when you work outside your cutting edge of spirituality. This may range from little or no effect to complete dissolution of normal personality structures.

These balanced and imbalanced stages of spiritual development are shown below in a pictorial form.

Next they are described.

Finally we compare these stages to the degree they bring about personality dysfunction, emotional and cognitive dysregulation, personality shutdown, kundalini syndrome, and permanent altered states of awareness (ASA). 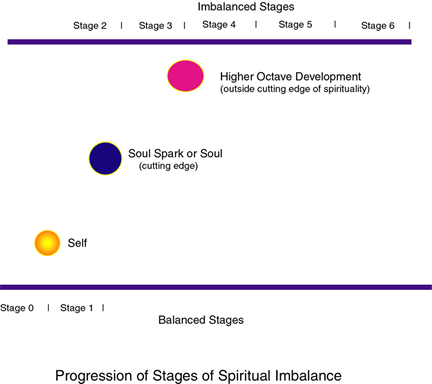 We can summarize some of these effects as aspirants pass through these different stages as follows:

Unfortunately, many spiritual groups do not reveal to the aspirant that further along their path there may be problems.

They don't talk about the interference with personality functioning: severe mood swings, difficulty thinking and deciding, and states of derealization or depersonalization.

They don't mention that there may be problems arising from the kundalini remaining raised or dredging up material from the unconscious mind.

They don't tell the aspirant that they will ultimately become fixed in an unnatural altered state of consciousness.

Instead they point to all of the positive phenomena that occur during stage two (the spiritual honeymoon phase), to make the aspirant desire to receive initiation (diksha) and make speedy progress on the path.

Worse, many of these spiritual teachings that advocate development at higher octaves of being, normalize and idealize these abnormal symptoms. For example:

They tell the aspirant that these abnormal states affecting the personality, kundalini and states of awareness are signs of progress on the spiritual path, and that the normal waking state of awareness is an illusion.

They point to signs of their advanced disciples entering states of catatonia (Samadhic trance) as representing advanced stages of spiritual development.

When aspirants have severe emergence phenomena and their personality begins to shutdown, they explain to these unfortunate seekers that this stage is temporary and will be supplanted by a stage of stable realization and bliss.

When aspirants break finally do break through into the zombie-like pseudo-personality stage after undergoing much torment, they are extolled as having gained true knowledge and exemplifying true virtue and ideal faith.

Those who propagate these teachings of higher octave work to all and sundry are not to be blamed. They are simply teaching others what they have learned and realized as they followed the guidelines of these paths.

They learned to recognize the abnormal symptoms engendered by this spiritual work outside their appropriate cutting edge as normal, as markers of spiritual progress, to be expected and even coveted as badges of honor.

The casualties are those who suffer through these symptoms.

There are many people who are paralyzed by kundalini emergency syndrome.

Some have lost their ability to make personal decisions or set goals for themselves.

Others are locked into altered states of awareness and cannot return to their normal state of awareness or functioning.

How many are there? Maybe thousands of people suffer these symptoms, and their stories are rarely told. We see this again and again:

Those who write to us with kundalini emergency syndrome often tell us they experienced their symptoms after practicing their mantra or doing their kundalini practices for a number of years. They detail how blissful it was in the beginning, and then later, these strange symptoms began to occur…

We urge aspirants—please do not become a casualty! Learn to identify your cutting of spirituality and do your work there.

When you begin unfolding the nuclei of identity, ensouling entities, and your spirit at octaves of being that are not on your cutting edge, you risk producing these symptoms of imbalance.

You do not have to go insane or become a zombie to make spiritual progress! When you work at your cutting edge, there is seamless integration between your Soul and your personality. Here's what you can do: