Q: You use the term, “nucleus of identity,” frequently in your writing. I’m still not clear what this is.

A: We often refer people to our article, “Understanding Nodal Points and Nuclei of Identity,” to define what a nucleus of identity is. The easiest way to understand this is that the Soul has four quadrants of activity. You can visualize this as a pie cut into quarters. 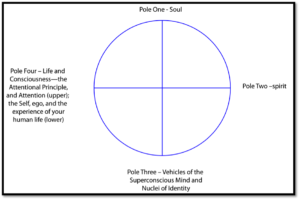 We call these four quadrants, the Poles of Being.

On the first pole, at zero degrees, is the Soul. When you meditate upon this pole, you are contemplating the essence we generically call the ensouling entity, on its own Plane. Depending on where on the Continuum of Consciousness you place your attention, you will encounter one of 13 ensouling entities.

For example, if you put your attention in the Planetary Realm, you will encounter the ensouling entity that is called the Planetary Soul. We simply refer to this essence as the Soul, since this is the cutting edge for so many people. Some refer to the Planetary Soul as the Higher Self, the God Immanent, the Transpersonal Self, or the Atma.

If you put your attention in the Cosmic Sphere, you’ll encounter your Astral Soul on this pole. Please see our article on the Great Continuum of Consciousness to learn about the 13 ensouling entities.

In Mudrashram®, we teach our students to meditate on their ensouling entity that is infused with the animating force of the Divine Spirit—this is what we call the cutting edge of spirituality.

If you rotate your attention 90 degrees to the right (clockwise), you come upon the second pole. Here you identify as the spirit. People also call this spiritual essence the spiritual heart, inner spiritual awareness, the loving heart, or Surat.

If you were to drop your attention into the inner streams of light and sound we call the Nada, you would ride up this current into the spirit that is associated with your cutting edge of spirituality. [This technique is called Surat Dhyan. We teach it in our intermediate meditation courses.]

But like the ensouling entity, you can focus on this spiritual essence at different levels of the Continuum. We call these discrete segments where the Nada begins and ends, domains—we have mapped twelve domains on the Continuum. [Please see our article on the Great Continuum of Consciousness about the 12 domains of the spirit.]

People usually associate the spirit with meditation upon the area of the heart, but some domains begin where you feel your spirit at the point between the eyebrows or even the navel. The practice of opening the channels of the Nada through moving your spirit along them, ultimately to the source of the spirit, has been called the heart path.

If you rotate your attention another 90 degrees to the right to 180º, you encounter the pile of being of the vehicles of consciousness of your Superconscious mind. It is on this pole that you encounter the integration centers we call nuclei of identity.

We have located nuclei of identity in the first through fourth Planetary Initiations, the first through fifth Cosmic Initiations, and on each Supracosmic Path. People who meditate on the spinal axis, sometimes called the cerebrospinal axis, the spinal tube, Sushumna, or the chakras typically come to identify with a nucleus of identity, instead of the Soul or the spirit.

Probably the three most common nuclei of identity with which people identify are:

Finally, if you rotate another 90 degrees to 270º, you come to the fourth pole. This is divided into an upper and lower zone.

The lower zone contains your personality and your life. This is where you encounter the two personal integration centers, the ego [the personal identification center that is embedded in your experience of your life, in what we call the Conscious mind] and the Self [the personal identification that governs your entire personality; it dwells in the Metaconscious mind]. This zone also includes the bands of the unconscious mind that express in your life—this is the level of the mind that psychologists call the shadow.

The attentional principle dwells in the system of chakras of the Subconscious mind slightly above the point between the eyebrows. It is from this perspective that you behold the thread of consciousness that travels through each band of the mind. It is from this perspective of the fourth pole that you view the map of the Great Continuum of Consciousness.

We encourage aspirants to familiarize themselves with the perspectives on each of these four poles of being. In the Mudrashram® system of Integral meditation, we uniquely train you to work on all four poles of being and give you meditation tools that actualize you personally and spiritually. You learn these methods in our intermediate courses, the in-person Mudrashram® Master Course in Meditation or the by-mail or online Accelerated Meditation Program.

Q: How are Mudrashram® meditation practices different than those I get from other groups?

A: Each group gives you tools appropriate for the job they do. Here are some examples:

A Wiccan or Occult group will show you how to unite with your Soul Spark and activate the upper Subtle Realm octave of will, which we call the Magical Will, to bring about manifestation and to protect against evil influences.

New Thought or New Age groups that operate on the Abstract Mind Plane and Psychic Realm give techniques that enable you to unite with the wave of the present time and your Higher Self, to process issues to completion, to activate the Soul’s power to manifest its transpersonal will, and to awaken your psychic abilities.

Jewish and Christian groups train you to commune with the Holy Spirit in the inner altar center of the Christ consciousness or Moon Soul nucleus of identity in the First Planetary Initiation. You learn to connect with God and listen to His guidance, and receive His blessings in your life.

I AM Movement groups lift your attention to unite with the Mighty I AM presence nucleus of identity in the Second Planetary Initiation, where you can activate the Omnific power of the spoken decree to manifest your intention.

Yogi Preceptor lineages teach you how to unite your attention with the cosmic consciousness nucleus of identity in the First Cosmic Initiation, and to transform this essence.

Light-Master-led groups reveal to you how to awaken the cosmic soul awareness nucleus of identity in the Second Cosmic Initiation and unfold it, while concurrently guiding the spirit on that segment of the Continuum to its origin.

Cosmic Masters awaken you to unite with your Astral Soul and progressively move this essence towards its source.

Transcendental Sphere Sat Gurus focus your attention on the spirit upon their Path, and lead this essence to its origin in the highest Plane at that level of the Continuum.

Mudrashram® spiritual practices are keyed to your cutting edge of spirituality, and lead you to progressively complete your spiritual development in Subtle, Planetary, Transplanetary, Cosmic, Supracosmic, and Transcendental bands of the Great Continuum of Consciousness.

Q: Why do people have such different perspectives on spirituality? Some people relate to God from the standpoint that the Divine is far away, only to be approached through prayer. Others seem to stay in a state of altered state of consciousness in which they claim to experience oneness with God. Others seem to emphasize traveling on a Path to unify with God at the end of their spiritual journey.

A: We discuss these relational modes to the Divine in our book, “The Winds of Adi Sat Guru Desh,” in greater depth. While there are several other types we discuss in this book, the three most common ones we call the Brahma mode, the Vishnu mode, and the Shiva mode.

In the relational type, you unite your attention with a nucleus of identity or your spirit, and develop a relationship with the Divine. For example:

In Brahma mode, you open a portal of communication between your personality and an agency in the Superconscious mind. For those who lack faith in a Higher Power, this might simply take the form of waking up in the morning and having their instructions of what they need to do for the day delivered to the preconscious doorway.

In Vishnu mode, you enter an altered state of awareness and remain fixed in it. With sustained union with this spiritual essence, you identify with it. You begin to see this essence in others and relate to others as if they were that essence. You may feel compelled to help others identify with this same essence.

In Shiva mode, you objectively measure your progress along a delineated Path. The emphasis here is on unfolding this spiritual essence and its associated vehicles of consciousness.

Mudrashram® is an example of a Shiva mode Path that unfolds your ensouling entity and its associated vehicles of consciousness at your cutting edge of spirituality, and you concomitantly open the track of the Nada to this same level to achieve balanced spiritual development. You do not remain in an altered state of awareness like the Vishnu mode Paths. Like the Brahma mode Path, we do teach you how to receive guidance from the Soul and the Divine to conduct your life. You do your daily work at the level of the personality; you do your daily spiritual work at the level of the Soul—you make progress in both areas of your life.