Q: Could you give more information about yogis and Masters in their astral forms in Mount Shasta, the Himalayas, and other power spots of the world?

A: In addition to the physical forms of advanced Initiates that can be experienced with the physical senses, most spiritual teachers also manifest higher etheric and astral forms through which they are able to minister the Light of their lineage to those who are in attunement with them—their disciples and the aspirants who have begun work with their tradition.

One of the places you can view these higher forms is on the so-called “etheric grid” on the Planes of Etheria, which is the highest Subplane of the Biophysical Universe in the Planetary Realm. On this level, you appear in a spiritual form that resembles a pilgrim. As you evolve spiritually, you move along the winding path of this grid. 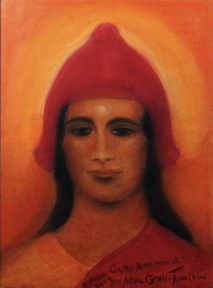 We can mark certain places on this etheric grid as corresponding to certain Initiations that the Soul is undergoing. [So if your pilgrim form shows up in this location, it suggests your Soul is journeying through one of the Planetary or higher octave Initiations.] For example:

So this is a mirror of your spiritual development on the Planes of Etheria. We can find other mirrors of development in the highest Plane of the Subtle Realm, which call the Subtle Illumined Mind; or the Ancient Wisdom Subplane of the Third Planetary Initiation, for example.

Reflected Forms of the Masters

In addition to looking for the mirrors of the spiritual development of advanced yogis and spiritual Masters, you can also find these higher forms through meditation on the platforms of Mastery on the Higher Planes.

These platforms of Mastery include:

When you meditate upon where the spiritual essence of these Masters dwell—their ensouling entity [See the tab on “The Possibilities of Ensoulment”] or nucleus of identity—in one of these platforms of Mastery, you can then trace their many reflections on each Plane of Light.

So, were you to meditate upon Jesus in the Planetary Hierarchy, you would find that He is reflected through His forms on each Plane below. If you follow the thread upward, you could find His forms of Mastery in the Cosmic, Supracosmic, and Transcendental Spheres.

Before you get too excited here, just like you don’t send email to someone who has not solicited your contact, you are not invited to start meditating on Masters without having them invite you. If you try to do this, you will be held in abeyance by the force field around them, and you will not be able to get in.

When you have been working with a Master, devotedly and one-pointedly for many years, he or she may take you into his or her confidence and reveal his or her inner forms to you, and let you call upon him or her in one of these forms. This permission to call upon spiritual Masters and invoke their Light through one of these forms is called the stage of “disciple upon the thread.”

For example, my first spiritual teacher, Maha Genii Turriziani ascended into the Cosmic Hierarchy and was anointed to become a Cosmic Master. At this stage, he had direct communion with Jesus and other Great Masters that dwell in those sublime spiritual heights.

Just My Imagination… Running Away with Me?

Before you actually reach the levels where these Masters dwell in their spiritual essence, your imagination can play many tricks on you and make up all kinds of wild stories—like, that Jesus went to India, that he was married to Mary Magdalene, that he visited a Buddhist monastery, or that he lives in Rome, Italy—but how do you verify any of this? Until you know the Master directly and he tells and shows you, how do you know any of this is true?

The Masters minister periodically to humanity through the Divine Light and directed thought: those who developed the requisite sensitivity to tap into their thought streams are uplifted, ennobled, and purified—and some may be actively Translated and granted accelerated spiritual unfoldment (Initiation) through the Grace of their supervising Initiate.